In 1832 Maria W. Stewart was bringing both women and men together for her lectures.  Known first as lecturing to women there came a day when a couple of men “sat in” probably quite skeptical.  At the next lecture there were several men, and so the number grew until it was clear that she was admired by both men and women.  Marilyn Richardson names her America’s First Black Woman Political  Writer.   Her early argument against the colonization efforts also denied what most people knew to be central to 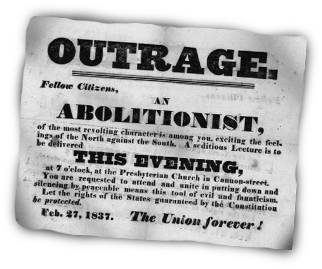 the founding of the nation.  Abolition was clearly an “Outrage”  to the founding convictions .   Here is an 1837 ad the Union Forever.